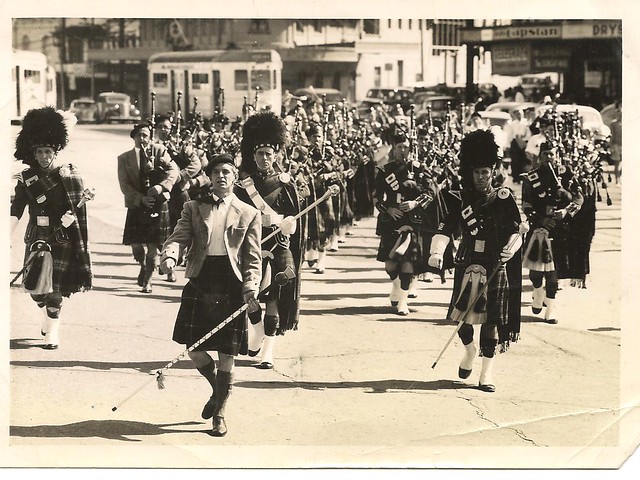 Brisbane's pipes and drums for 70 years

Brisbane Pipe Band was initially formed (as the City of Brisbane Caledonian Pipe Band) in 1950, after a meeting at the YMCA in Edward St, Brisbane.

The band wears McNeill of Barra tartan; initially, the band wore Anderson tartan, chosen because it was distinctively different from other Brisbane bands’ tartan at the time. However, in 1986 the band adopted McNeill of Barra to honour the important role the McNeill family played in the life of the band, especially long-serving Pipe Major Ian McNeill. The band still has a family connection today – Ian’s daughter is still a current playing member.

For the same reason, the band also currently uses the McNeill clan crest and motto, ‘Buaidh No Bas’ (Gaelic for ‘victory or death’ – not a motto we take too seriously, thankfully!), in all formal marketing and communications.

In 1976, Lord Mayor Clem Jones gave the band permission to display the Brisbane City crest on its drums – Alderman Sleeman formally presented the drums to then-Pipe Major Ian McNeill in a ceremony in front of City Hall.

Brisbane Pipe Band has competed in Australian and international pipe band competitions since 1958.

The band is currently registered as a competitor band with Pipe Bands Australia – Queensland and competes annually in Grade 4 at most major local competitions, including the Maclean Highland Gathering, Brisbane Boys’ College competition, and Queensland Championships. The band competed in Grade 4 at the 2018 Australian Championships held at Brisbane Boys’ College.

We have been a performance-focused band since our inauguration. We currently play for Brisbane’s major annual parades – St Patrick’s Day (March) and Anzac Day (April), and also lead the Brisbane Sikh community’s annual Nagar Kirtan parade. For a number of years the band also played for the Maritime Union of Australia’s Labour Day parades.

Since the early 1990s, the band has played regularly for the Brisbane City Park Program to entertain the community and keep bagpiping traditions alive by playing Sunday afternoon performances in Brisbane parks. Since 2018, the band has played for the Paddyfest St Patrick’s Day festival, and we play regular gigs at local pubs and venues in Brisbane and surrounding suburbs. For many years, we have also been a regular participant at the Australian Celtic Festival in Glen Innes and the Stanthorpe Apple and Grape Festival.

1954: Playing for Queen Elizabeth II and Prince Phillip at the Grand Scottish Festival, Brisbane Botanical Gardens, during their Royal Tour of Australia

1972–74: Playing for the Lord Mayor’s Command Performance, Festival Hall (the 1974 performance was for HRH Prince Charles)

1982: participating in the Massed Band Display for the Brisbane Commonwealth Games Opening Ceremony

The band’s pipe majors and musical directors have included, among others:

The band’s association has been intrinsically tied to the eminent leadership of Brisbane City since its incorporation in 1950. We have been fortunate to have had many eminent Brisbane figures serve as the band’s Patron, including:

Much of this information comes courtesy of the historic records maintained by Keith Beakey (piper 1969–1993), author of City of Brisbane Pipe Band: an Anecdotal History 1950–1993 [click the link to download the PDF – 5.5MB].